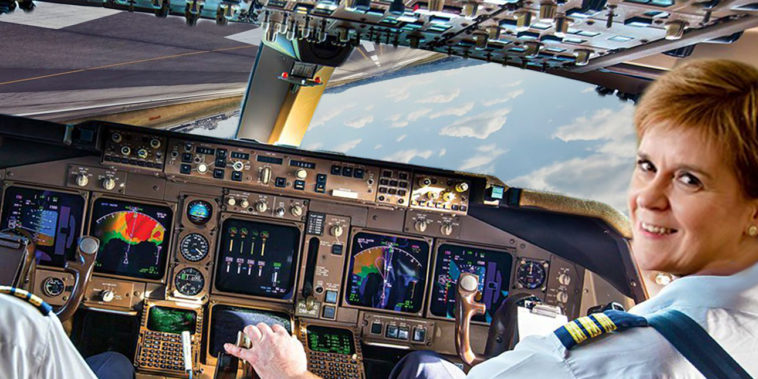 NIcola at the controls (Photoshop by Mark Devlin)

Like many of us who now find ourselves locked inside for most of the day, I have been watching more movies than usual. A few nights ago, one struck me with its resonance to current Scottish politics. It was about an aircraft that, mid-flight, suffered a catastrophic malfunction to its tail assembly, causing it to roll over and enter a steep dive that inverted all of its controls; actions that would have previously lifted the nose of the aircraft would only push it down further. As the pilots fought the controls, a clear but plaintive mechanical voice repeats, “Pull up. Pull up,” as the plane hurtles to the ground, as if the pilots hadn’t already realised the situation which they were now powerless to stop.

The scene reminds me of the SNP in recent weeks, as their civil war, the Salmond trial, a failing vaccine rollout, an embarrassing and damaging economic assessment and general political failure all come to the fore.

Firstly, the firing of Joanna Cherry, the only competent and respected SNP MP in Westminster. A shameless political assasination was arranged in a desperate desire to remove a possible challenger, resulting in widespread condemnation. One SNP local branch reported losing 14% of its members in a single weekend due to this move, with reports of 50,000 people leaving the party. By all indications, Cherry has only just started on her warpath.

“Pull up. Pull up,” the alert warns, but the SNP pilots are pushing all the wrong buttons.

Secondly, the Salmond inquiry is now a complete farce, increasingly challenged by people both inside and outside the party. Separatists and the opposition have highlighted that a scandal of this magnitude would never be tolerated in London. Key evidence censored, lying witnesses, uncooperative courts and cover-up after cover-up.

It has become a festering and increasingly septic wound for the SNP as the days pass. In a single national newspaper there were four stories on the inquiry yesterday, three the day before that and four again the day before that. Each story chips away at the SNP’s holier-than-thou image and the electorate’s faith in them. We are now reaching what promises to be an eventful climax when Nicola Sturgeon, her husband and Alex Salmond appear within ten days of each other, each hell-bent on destroying the other. Whether the truth comes out or not, this public display of infighting will certainly damage the party.

“Pull up. Pull up,” the alert drones. But the pilots are fighting each other.

Thirdly, the failing vaccine rollout. Much has been made of how Matt Hancock used the movie Contagion as a reason to buy more vaccine doses and as a source of ideas. Still, I feel that I speak for the vast majority of people here when I say, I don’t care which movie he got the idea from, as long as it works. While the UK rockets ahead in our rollout, and as the EU stumbles from blunder to blunder with theirs, Scotland is falling behind as the arrogant SNP will not ask for help when they need it.

Their pride stopped them from asking for military assistance; their pride meant they would not admit they had got it wrong or that they had benefited from being in the UK’s vaccine program. Their drive to centralise all power has meant that GPs are mired in endless red tape with policies and procedures that limit their access to vaccines and reduce the speed of the rollout.

Make no mistake, the SNP are horrified at the UK’s vaccine successes. It undermines their secessionist arguments, and puts the boot in the PR frenzy they intended to make of it. Imagine the endless statements, criticisms, and grandstanding we would have had to endure if the EU and UK fates were reversed.

“Pull up. Pull up,” the voice insists. But the pilots have decided to blame the malfunction on England.

Fourthly, the LSE’s damaging assessment that ‘independence’ would — only on trade matters and not considering the enormous costs associated with everything else —  be two to three times more economically damaging than Brexit. The SNP were quick to discredit the report, first attacking the report’s methodology and then its authors, despite having championed the same institution’s report on Brexit produced only a year earlier.

Apparently, the party’s amateur economists, who have no formal economic training to speak of, somehow know more than people with PhDs at one of the most prestigious academic institutions globally, with over a century of experience in dealing with economic assessments and planning.

Of course, this could all be resolved if the SNP would simply show us their reports. But they don’t have any. The drivel they attempt to publish would be torn to shreds by anyone with the most rudimentary understanding of economics and common sense. For all the SNP’s grandstanding on holding a referendum this year, they have not produced a single page about what a separated Scotland would be like.

“Pull up. Pull up.” The pilots could save the aircraft, but they’re ignoring the data.

But it’s not just the pilots, take a look at the plane. It’s tired and worn out. For all its promises of social revolution, the SNP hasn’t delivered on its talk. If a party cannot achieve its goals after 14 years in power, it is doubtful it ever will. Even prominent nationalists are describing the situation as feeling “like the last days in the bunker”, a reference to Hitler’s last days, as he moved non-existent armies across nonsensical maps with totally unrealistic objectives, amid a mental breakdown.

People who have waited 14 years are losing faith that the SNP will ever deliver anything. Will the SNP get a majority in the next elections? Even favourable polling shows them nowhere near the strength they enjoyed in the runup to the last elections. It increasingly feels that our SNP pilots have heard the warnings, but rather than fight to save the passengers, they’re reaching for their (golden) parachutes.

Scotland has for centuries been a country of block voting. Once it was the liberals, then Labour, then the SNP. But each got complacent and arrogant and worn out, and was replaced. We are now merely watching history take its course again.

The plane is in a death spiral. The pilots are on the way out the back door. As it heads into the ground the passengers hear a quiet voice.

There is an important psychological sub-plot to the Strugeon-Cherry cat fight – arguably it is the main plot. The SNP are a bunch of “haters”, as Nicola Sturgeon has confessed herself to be. She admitted to Mandy Rhodes, in a book called “Scottish National Party Leaders” (2016), that hatred has been “the motivation for my entire political career” (p. 358). You can see a film about that here: https://www.youtube.com/watch?v=HPv0bWYf524&feature=youtu.be This is an essentially negative position, and it springs from a psychological rather than a political root. It is that which gives the venom of their own self-hatred (psychological self-harm) which… Read more » 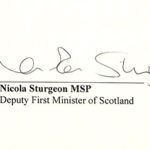 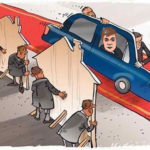