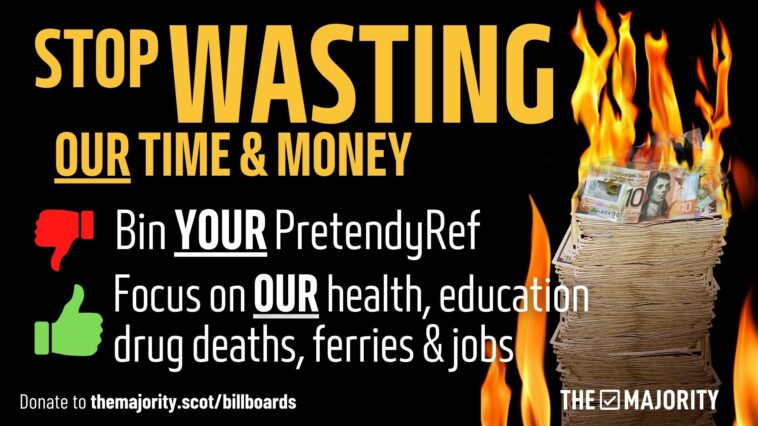 Today, The Majority, with the support of donors who contributed to its crowdfunding campaign, launches the STOP WASTING OUR TIME & MONEY, BIN YOUR PRETENDYREF campaign to coincide with oral arguments at The Supreme Court by the Scottish Government, which has asked the Court to assess the legality of an advisory referendum on Scottish independence. The campaign includes digital billboards in Glasgow, and Edinburgh (locations in appendix).

The billboards also have a link to a new crowdfunding campaign, to fund further anti-PretendyRef billboards:

The campaign message — STOP WASTING OUR TIME & MONEY, BIN YOUR PRETENDYREF  — highlights the fact that the majority of Scots reject Sturgeon’s attempt to have a referendum in 2023. A recent poll by Scotland in Union (Note 1 below) indicates only 35% of Scots support a second referendum in 2023 and 55% disagree with spending money on it. The same poll noted that less than 1 in 14 (7%) think independence is their top priority, with the vast majority of Scots wanting action on the Cost-of-Living crisis, the NHS, the economy, education and other services.

The Scotland Act says that any attempt by The Scottish Government to make laws that ‘aims to affect’ reserved areas, such as The UK Constitution, is unlawful, therefore, the Lord Advocate has asked for a Supreme Court judgement on the legality of an ‘advisory’ referendum, which would seek to find out the opinion of Scots on the independence question.

Even if the Supreme Court does decide the referendum is lawful, it will essentially be a non-binding Scottish government-run opinion poll. It can not only be ignored by the UK Government, it will be boycotted by pro-UK voters.

Because the referendum is not a binding referendum, it has been labelled as a ‘PretendyRef’ by its opponents. The Conservative, Labour and Liberal Democrat parties have already indicated that they will boycott such a referendum, while The Majority intends to lead a boycott campaign on its social media channels and with further billboards.

Mark Devlin, founder of The Majority:

Nicola Sturgeon wants her followers to believe that there will be a meaningful second independence referendum in October 2023. However, her own Lord Advocate has told the Supreme Court that even if they win the case, that any referendum would be advisory and non-binding.

Sturgeon’s PretendyRef is either illegal and cannot happen, or her PretendyRef is legal and meaningless. The UK government can, and will, ignore it, and we will lead a campaign for the majority of Scots, who voted to remain in the UK in the real referendum in 2014, to boycott it.

The majority of Scots who do not want a referendum in 2023 are frustrated and angry that Nicola Sturgeon continues to spend time and money on divisive legal shenanigans while we’re in the middle of a cost-of-living crisis and Scotland’s services continue to decline from her lack of attention and lack of funding. Stop wasting our time and money, and bin your PretendyRef, Nicola!

The Majority is Scotland’s leading anti-Nationalist organisation. Since its founding in June 2020, it has grown to over 50,000 social media followers. It aims to unite Scotland’s anti-Nationalist majority and expose Nationalism as a toxic ideology. The Majority’s #ResignSturgeon billboard campaigns and aerial banner for the 2021 Scottish Elections were seen by hundreds of thousands of Scots and featured in over 70 newspapers worldwide. 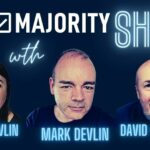